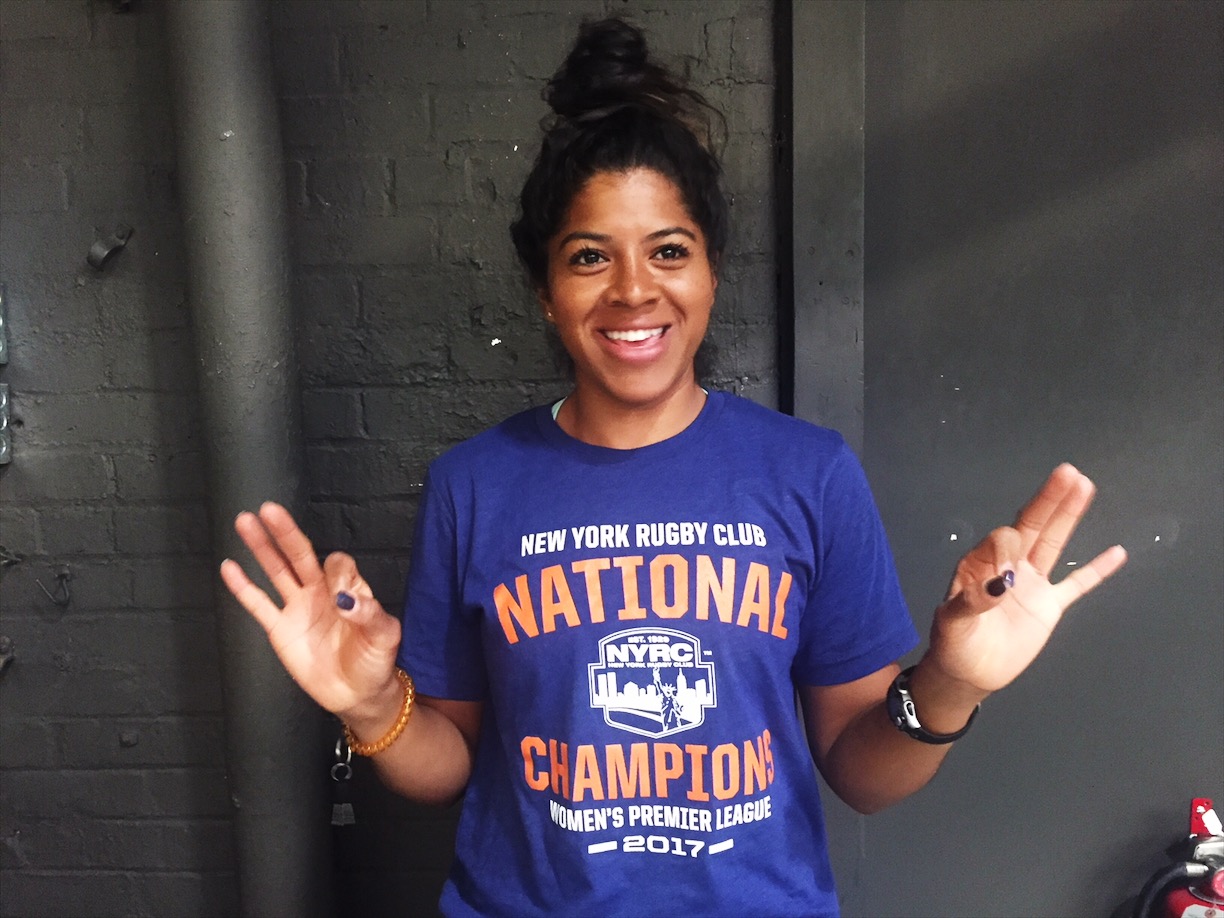 For Women’s History Month, we celebrate member Jenn Salomon—a woman most certainly making history as member and pioneer of the Quinnipiac Women’s Rugby program, the 2nd Division I NCAA women’s rugby team in the nation back in 2011.  She is also currently training at mActivity for summer Sevens rugby. In rugby, Sevens is played on teams of seven against seven for 14 minute games. This woman is high-octane and into some serious fitness. Sprinting, sprinting, sprinting at a high, high intensity.

Something valuable to learn from Jenn is that having a big personality with a dream doesn’t translate into immediate success—we have to train daily for the things we want. Jenn has faced setbacks like we all have. So many things she wanted didn’t happen right away, but through sweat and tears. Whether you want to lose weight, win the next rugby match or find peace of mind, daily routine and mental toughness is crucial to turn dreams into goals and then gratifying realities. This is her story.

“I feel like everything I’m going to say is cliche, but I’m just going to go for it. I was born in Brooklyn, New York, raised in Rockland County, New York, went to high school in New Jersey, and moved to Connecticut for college at Quinnipiac where I graduated with a double major in marketing and international business.

My mom is from Mexico and my dad is from Haiti, so I am always trying to travel. My first internship in college was in Tianjin, China where I did product development and business strategy for a pharmaceutical company. The next summer, I took an internship in West Hollywood working on product placement and brand integration for an international entertainment company called FRUKT. Do you remember that Zac Efron movie about college parties, We Are Your Friends? My job was to read the script and let the client know whether or not there might be an opportunity to feature their product in the movie. I was completely prepared to work corporate in New York when I graduated, but rugby had different plans for me.”

“I played basketball, softball, track and volleyball in high school, but I just went to Quinnipiac for academics. I never had any interest in a club sport until I saw a flyer to play rugby for the inaugural NCAA [National Collegiate Athletic Association] rugby team looking for athletes. I really like opportunities, challenges and growing, so I went to the tryout and ended up making the team. The first two years were challenging since most of the team had never played rugby before, but we went after it with a something to prove mindset. By the end of our second year we were playing the best club teams in the country—BYU, Penn State, Central Washington, Army, Indiana University.  My team and I were women’s rugby pioneers. Now there are 19 NCAA rugby teams and I coach one of them at Sacred Heart in Fairfield.”

“I was always pretty confident, but playing rugby gave me more confidence to speak up and challenge others, especially men. I learned how to be mentally tough by learning how to be comfortable being uncomfortable. I remember holding a ten minute plank or ten minute wall sit—not for myself, but for my team. It’s hard to teach people selflessness and how to push through difficulties, but I think that these things were the biggest lessons I started learning through rugby.”

“When I finished my undergrad at Quinnipiac, I was still living the college life, partying and having a good time, so I joined a women’s club rugby team in New Haven for fun. Practice was twice a week. More social and less organized than I was used to and I wasn’t into that. In the summer of 2016, a friend introduced me to Old Blue RFC, an elite and well known club out of New York. That’s when the game went way up. The talent was immense and I was able to realize where I stood as an athlete and what I needed to do to get better.

We play all summer in hopes of reaching the USA Club Rugby 7s National Tournament.  I was confident that I had a good chance of making the roster to represent Old Blue. That didn’t end up happening. I was really upset but still supported my teammates from afar. At this point, I knew I was either going to sit around and feel miserable or do something about it. This was my fuel, my fire. My next goal was to make the roster for the Northeast Olympic Development Academy’s next playing cycle. The purpose of the academy is to identify, develop and prepare Sevens rugby players for USA National teams and future USA Olympic teams. That’s when I got serious. And honestly, mActivity is where I put my hard work in.”

“I had two months to prepare for NEA tryouts in October and started working hard in silence. I shifted all my energy back toward myself, work, and school (finishing up my MBA). I stopped drinking and started working out consistently at mActivity. Lifting. Watching Film. Meal prep. Focused. Just in and out.

I journal before games. I write out exactly what I’m going to do, “I will not miss a single tackle.” “Be a wall.” Things like that. I just started doing this in the fall and I really saw a difference in my performance. I also read The Daily Stoic by Ryan Holiday. Every day there is a different quote from a stoic and I write about it. For lifting, I do squats, deadlifts, bench, pull ups, presses. Some olympic lifts. Yoga once a week for mobility. And since Sevens is more about leaning out and high intensity, I do HIIT and lift three times a week right now.

At night, I stretch for 20 minutes, write a reflection of my day and then meditate before bed. I go into child’s pose for five minutes. Breathe. And feel the ground around me. When I go to bed I use a meditation app called Drift To Sleep. I lay down and I don’t even remember falling asleep.”

“If you don’t have something that grounds you and sets you up for success, you’re not going to meet the goals you always talk about. People tend to think that they have to do all of these things to become successful, but it’s really just about one thing—your mindset. My aspiration is to keep learning about the little things that happen in between accomplishment. If I get to that higher point—great. But I have to be where I am right now.

I have been with the Northeast Olympic Development Academy for almost 2 years. Rugby has allowed me to meet incredible people that have impacted my life and taken me to see some amazing places. I have been all over the country, Barbados, Costa Rica, Dubai, and more.

This past fall, I joined New York Rugby Club in the Women’s Premier XVs League.The team went 10-0 completing the season with the 2017 USA Rugby National Champion Title defeated Glendale. I was honored and humbled to receive the Rookie of the Year. Yes, I put in the work but I do thank my success to the support of my teammates, friends, family, and my boss/coach Michelle Reed. And of course all of the coaches that have given me the opportunity and impacted me in some way James English, Ryszard Chadwick, Steve Lewis, Koma Fischbein, Gary Heavner, Michelle Reed, and Becky Carlson."

Why Did You Chose mActivity?

“I love mActivity, everyone here is so thoughtful and helpful, and it’s really where I started making changes and started seeing the benefits of my hard work. I lost 20 pounds. I did pilates with John and Amy and learned how to use my body in new ways. I was able to translate what I learned from them into my Rugby game—they’re amazing. I still have a lot of work to do but I feel like I’m on the right path. My mom always told me that she knew I could excel at sports but there was always a wall that kept me from breaking through and becoming my best. Finally in the fall, I broke down that wall and her advice clicked with me. Now I’m like, ‘Jenn, keep going. Fight.’”

The #mActivityPeople interview series focuses on the mindful lives and health routines of mActivity’s inspiring community. Submit your own on Instagram—post your mindful mActivity (tag us @mactivitynh!) and include the hashtag #mActivityPeople for a chance to be featured on our blog.